So, let’s try to solve these doubts step by step.

We can take the following figure as an illustration: 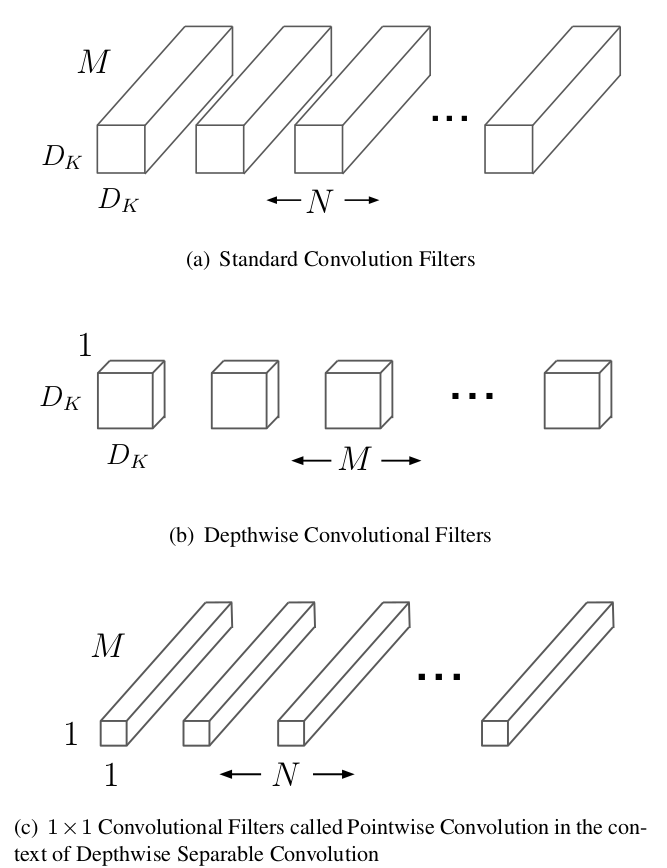 Suppose we have the convolutional layer with kernel size $K$, input size $C_{in}\times H\times W$ and output size $C_{out} \times H \times W$ (stride=1). For a standard convolution operation, the computation complexity, here we use MACC (Multiply-accumulate, also known as MADD), is calculated as (for how to calculate FLOPs or MACC, we kindly recommend this great post: How Fast is my model?):

With decomposition, the two separate operation parts lead to output feature maps with exactly the same size as the standard counterpart does while with much less computation cost. How does that works?

In addition, the number of parameters of the standard convolution filters is $K\times K\times C_{in}\times C_{out}$. With depth-wise and point-wise convolution, the number of parameters becomes $K\times K\times C_{in} + C_{in}\times C_{out} = C_{in}\times (K\times K + C_{out})$. In this way, both computation cost and model size can be considerably reduced. What’s more, this can be further done by applying the Resolution Multipier and Width Pultipier, which reduce the resolution of the input images and channels of all layers by a multipier coefficient.

If you are not clear, the following is the whole MobielNet v1 structure with all the bells and whistles. 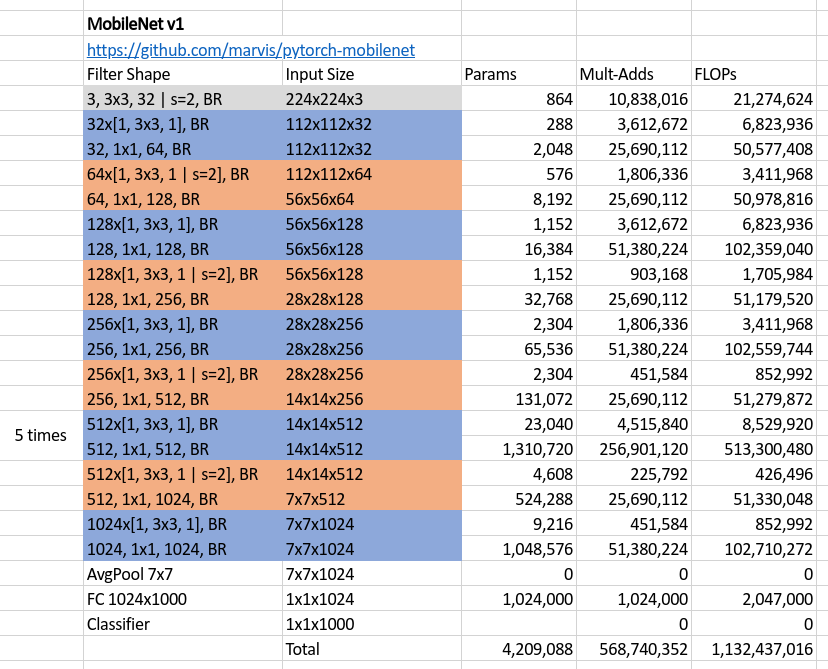 The structure was drawn according to the code in https://github.com/marvis/pytorch-mobilenet, where filter in each row of the table takes the input with size written immediately in the same row, and therefore, outputs a volume with size written in the following row, and then, processed by the next filter. Finally, BR means Batch normalization and Relu layers after a certain filter.

What surprised me was that there is no residual module at all, what if we add some residuals or shortcuts like ResNet? Afterall, the author got his purpose and the accuracy on ImageNet classification task is comparable to the one using the standard convolution filters instead as well as other famous CNN models.

where, 0.50 MobileNet-160 means halving the channels for all layers and setting the resolution of input images as $160\times 160$. We can see from the table that the only highlight of SqueezeNet is its model size. It is not ignorable that we also need the speed of computation when we embed our model into resource-restricted devices like Mobile phones. It’s hard to say that SqueezeNet is good enough when we see that its MACC is even more than AlexNet, with a large margin.

However, it’s worth thinking why SqueezeNet has so few parameters. Take a look at it basic unit (a fire module): 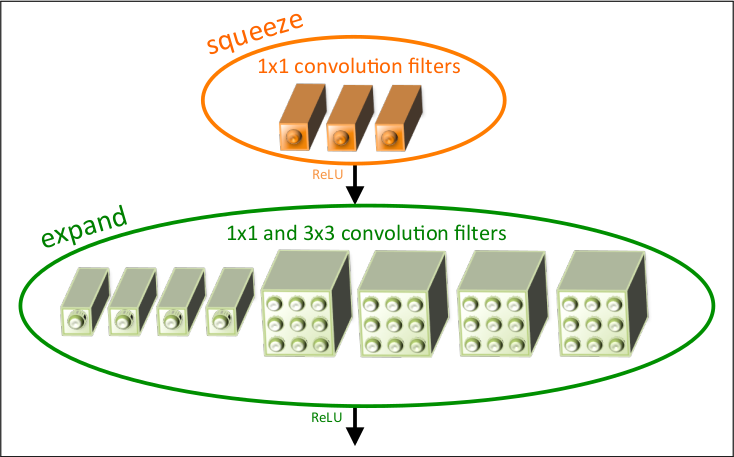 The basic idea behind SqueezeNet comes from three principles. First, using 1x1 filters as possible as we can; Second, decreasing the number of input channels to 3x3 filters. The last pinciple is to downsample feature maps after the merging operation of residual blocks so that to keep more activations.

By stacking fire modules, we get a small model, while also having numerous computations.

Keep it in mind that MobileNet v1’s success attributes to using the depth-wise and point-wise convolutions. These two kinds of filters become the very basic tools for most of the following works focusing on network compression and speeding up, including MobileNet v2, ShuffleNet v1 and v2.

For the MobileNet v2, similar to the above illustration, let’s first take a look at its whole structure. For analysis, we take part of it as the whole structure is stacked with similar components.

In this illustration, the green unit means a residual block while the orange one means a normal block (without residual) with stride 2 to do downsampling. The main characteristic of MobileNet v2 architecture is for every unit or block, it first expands the number of channels by point-wise convolutions, then applies depth-wise convolutions with kernel size 3x3 on the expanded space, and finally projects back to low-channel feature spaces using point-wise convolutions again. For a block doesn’t having to downsample its input volume, an additional residual component is applied to enhance the performance. Another feature is, as illustrated in the above figure with a single B after each block which means Batch normalization only, it doesn’t use non-linearity at the output of blocks. Now, I have the following questions:

OK, let’s try to answer these questions (if you have any different idea, please do not hesitate to contact me, the email can be found in my profile).

For question 1, there is a intuition when designing MobileNet v2: bottlenecks actually contains all the necessary informations. So it would not cause information loss if we do like that. On the other hand, connecting the “fat parts” is possible, but that also means we should connect two volumes produced by two depth-wise convolutions, sounds strange because we usually connect the outputs of normal convolutions (here a point-wise covolution is a normal 1x1 convolution), but nothing stops trying.

For question 2, we can find our answer from the analysis of ReLU. 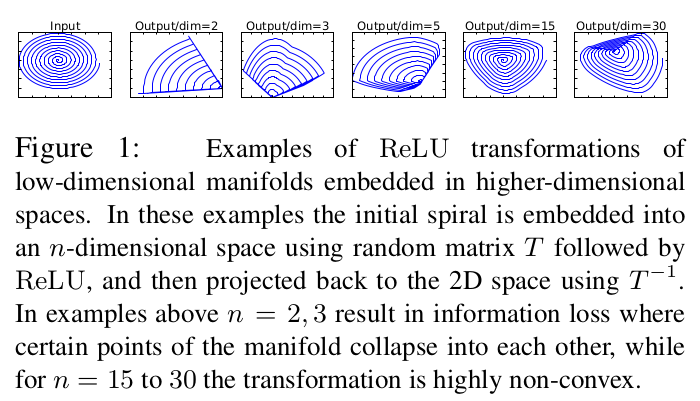 ReLu cause information collapse. However, the higher the dimension of the input, the less the degree information collapses. So the high dimension in the middle of block is to avoid information loss. And intuitively, more channels usually means more powerful representative features thus to enhance the discriminability of a model. According to this, it is reasonable not to apply ReLU at the “slim output” of the block.

We can use the same explanation to attack ResNet, which indeed use ReLU on the low-dimensional features. So why is it still so effective? This would attribute to its high dimensions of input and output ends of a ResNet block, which ensure its representative ability even with the ReLU layer in the bottleneck.

The design art of MobileNet v2 is to keep few number of channels for the input and output of each block, while doing more complicated feature extraction inside the block with enough channels. This ensures the extraction of effective and high-level features of the image while reduce the computation cost at the same time, because the main computation cost is from the 1x1 convolution filters (see the following figure).

Above figure shows that a ShuffleNet v1(1.5) and a MobileNet V2 have the similar model size (3.4M params) and computation cost ($\approx 300$M MACCs), and furthermore, the similar classification accuracy. This means that ShuffleNet v1 is at the same level of MobileNet v2, the two are closely comparable. So, what does a ShuffleNet v1 look like? Click here

Again, we capture part of it to analyse.

Since we realize that the main computation takes place at the 1x1 convolutions, which also accounts for main part of parameters. Unlike MobileNet v2 who solves the problem by reducing number of channels inputted to 1x1 convolutions, ShuffleNet v1 is more straightforward. Specifically, rather than only applying group convolution (for group convolution, see ResNeXt, depth-wise convolution can be regarded as an extreme case of group convolution) on 3x3 filters, it also applies group operation on 1x1 filters. Although it reduces computation cost and number of parameters effectively, it leads to a problem: different groups cannot communicate with each other, thus restrict the power of model.

Shuffle in ShuffleNet v1 provides the solution of above problem by shuffling all the output channels of 1x1 group convolutions as a whole, so that enforce information communication among groups. And the most inspiring thing is the shuffle operation doesn’t take any additional parameters and computationally efficient. 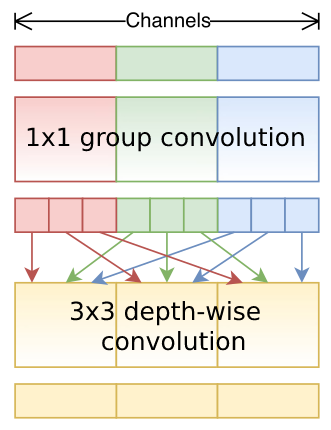 As discussed above, MobileNet v2 and ShuffleNet v1 both focus on reducing computation cost on 1x1 convolutions, while there are still three more differences according to their structures.

Well, I think it’s worth trying and see what will happen if we take the ReLU away after the 3x3 convolutions in MobileNet v1 or MobileNet v2 (e.g., only connect the ReLu to the first 1x1 convolution layer of each block mobileNet v2). On the other hand, the reason why ShuffleNet v1 doesn’t connect a ReLU after the 3x3 convolution layers comes from the explanation in Xception, which thought that for shallow features (i.e., the 1-channel deep feature spaces of depth-wise convolutions), non-linearity becomes harmful, possibly due to a loss of information.

NasNet, in which the word “Nas” is an abbreviation of Network architecture search, definitely is a more advanced technology to search for compact and efficient networks. The auto-search algorithms and other very recent research works (works in ICLR 2019, ICML 2019 and CVPR 2019) will be gone through in another post. Let’s proceed to ShuffleNet v2.

The above methods are based on two principles, small model size and less computation cost. However, in practical applications, efforts taken on the above criterion doesn’t exactly bring a corresponding faster model in hardware equipments. There are some other factors we should take into account when designing an embeddable model for hardware devices – memory access cost (MAC) and battery consuming.

Based on the above findings, ShuffleNet v2 rethinks the previous compression models and proposes four useful designing guidelines.

G1, Equal channel width minimizes MAC (this means letting number of input channels equal to that of output channels);
G2, Excessive group convolution increase MAC (do not use or use less group convolutions);
G3, Network fragmentation reduces degree of parallelism (small stacked convolutions with in blocks and branches in NasNet);
G4, Element-wise operations are non-negligible (like ReLU and addition operations in residual block).

So the problem is:

How to maintain a large number and equally wide channels with neither dense convolution nor too many groups?

We mention that all the above guidelines have been proved by a series of validation experiments. Let’s draw the building blocks of ShuffleNet v2 here (actually I’ve also drawn a table for ShuffleNet v2 structure here, but takes time to understand…) 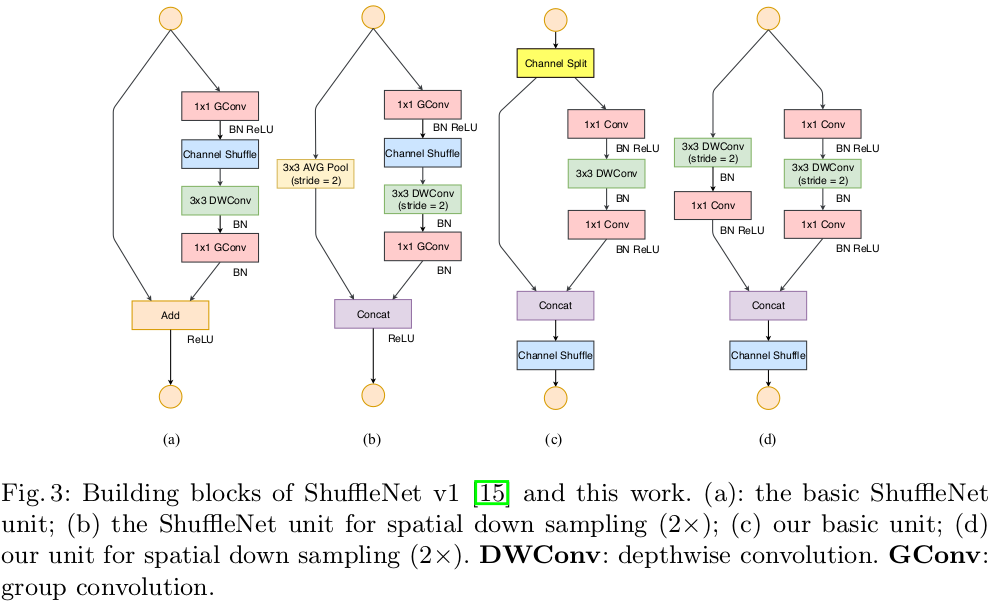 How does it solve the problem?

Under the same FLOPs, ShuffleNet v2 is superior than other models. 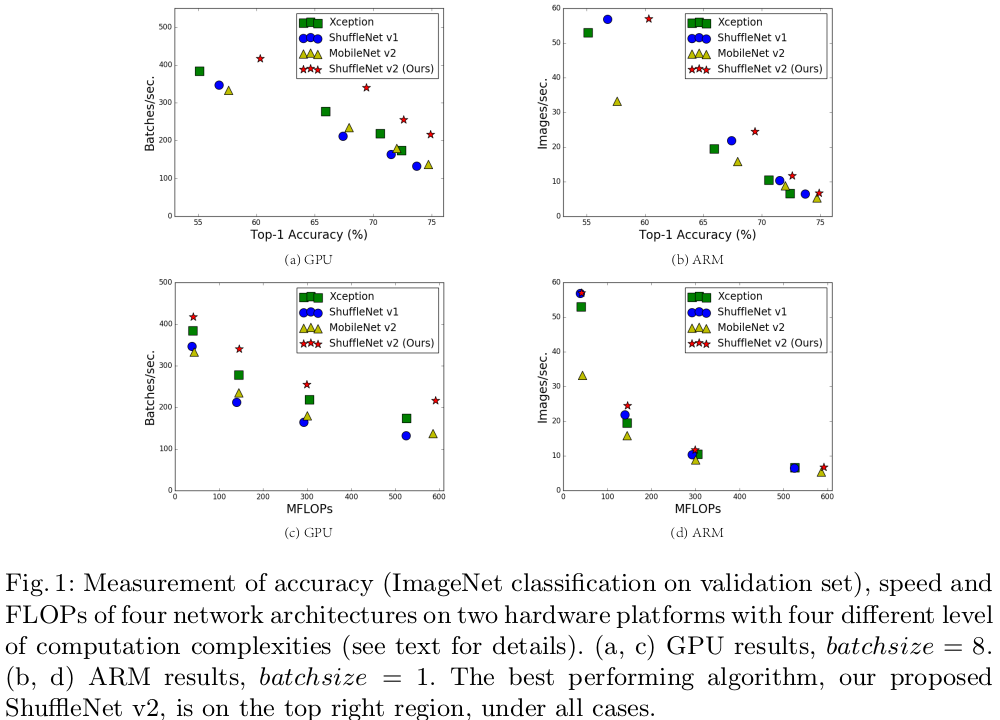 We have analysed several classical network compression models, from which we can see that the main strategy to reduce model size and computation cost is using Depth-wise convolution, Group convolution and Point-wise convolution.

There are other interesting algorithms like network pruning, network quantization (e.g., binarize weiths and activations) and Network architecture search. They also lead to fast and small network models and will be discussed in the next post.

Note: Most of the figures are directly copied from the original paper. 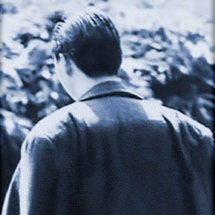